A year ago I wrote about why to not get the Windows 10 “free” upgrade – http://www.theweeklygeek.com/2015/06/04/windows-10-the-offer-to-refuse/ now it seems you don’t have a choice. Daily I am receiving phone calls from people who said they did not want or approve the change to Windows 10 on their private property, aka their computers.

I seems Microsoft is self installing Windows 10 on many computers again. In the past I came up with ideas and how to’s based on removing the forced updates. 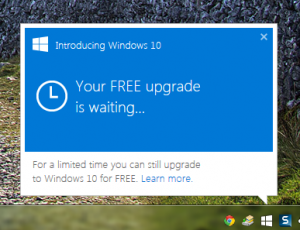 Take it you peasant!

Microsoft being the company they are forced more crap different ways into computers to make you take it! While I like Windows 10, I DO NO TRUST Microsoft giving it away. That just doesn’t make sense for them. 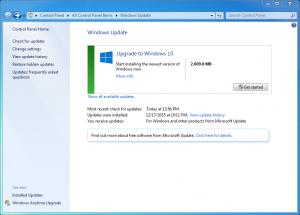 “You know we want it so you will enjoy it” – Microsoft

About 6 weeks ago I came across GWX Control Panel which claimed to stop Windows 10 in its tracks. Before promoting it, I wanted to test it, and test it I have. 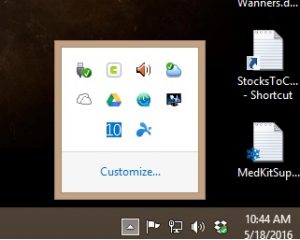 I’m here to save the day!

First I wanted to be sure it was spyware and malware free, and it is. Thank you Ultimate Outsider!

Next I wanted to see if it really stopped the pop-ups, removed the forced Windows updates, stopped the Scheduled Tasks and removed the downloads that Microsoft FORCEABLY and without cause downloaded on YOUR computer. GWX did just that.

So far it has blocked the Windows 10 upgrade 100% of the time with only 1 computer having side effects and I am positive they are due to my working like a squirrel and not taking my time. That one system had gone through a partial install of Windows 10 and I did not get to the EULA, instead I manually forced it to stop and then ran GWX, now Windows wont run any updates, and most plug ins, like Scheduled Tasks, and the backup wont run. Again, I take responsibility for that.

Here is the user’s guide to GWX – http://blog.ultimateoutsider.com/2015/12/gwx-control-panel-17-user-guide.html

Here is the link to the program – http://ultimateoutsider.com/downloads/ choose ‘GWXControl Panel’

If Windows 10 has started to install and you are at the Welcome screen, don’t panic! Carefully READ the prompts, click on your user name, when you get to the EULA (End User License Agreement), select “I do NOT agree”. Microsoft will back out and uninstall Windows 10 and restore your Windows 7 or 8. Then you should get GWX and install it.

Until we meet again, have a virus free week!